We’re memorizing a list of unusual words to use when we’re stuck as Scrabble players.

They’re bound to rack up the score and upset competitors.

We’re heartless that way. Our cruelty knows no limits.

Ensky means ‘to exalt’, the rest are anybody’s guess.

To us Scrabble and high school vocabulary tests are the only places for unnecessarily complicated words.

Certainly they don’t belong in business if you want people to understand you.

These days you get a stunning amount of rubbish with expressions like matrix enterprise schemas, incubate granular methodologies and mesh frictionless technologies.

Who knows what they mean. It’s all Greek to us.

Who cares, other than those wannabes who use over-complicated words to feel superior to everyone else.

Why don’t they get a life.

After all, isn’t the importance of a marketer based on differentiating the brand?

Isn’t it reliant on imaginative planning?

Isn’t it about selling more product and gaining a bigger market share?

Which is Greek for ‘it has nothing to do with spouting jargon’.

Its focus is a German Afrika Korps lieutenant who fought under Rommel in WWII.

He was captured in the North African desert and shipped to Camp Concordia in Kansas as a POW.

It was the start of an extraordinary business life, the creation of a media empire.

At Concordia you had time on your hands. Days dragged by inside a barbed wire enclosure.

He absorbed all that American business leaders were doing in the publishing and media industries as he came from a publishing family in Germany.

It was a business started in 1835 but it had amounted to little.

That was about to change with Mohn’s reading and study.

He picked up on a new American idea of the times for sales and the retention customers – book clubs.

At the end of the war Mohn returned to Germany to head up the family business.

Today it’s the mass media corporation you know as Bertelsmann, a giant organization.

As Dorothy from the Wizard of Oz might say, ‘we’re not in Kansas any more’.

Besides publishing, Bertelsmann is an international force in radio and television.

If you had a book called The 7 Habits of Highly Effective POWs, Reinhard Mohn would feature prominently on page one.

After all, he’s an example of pulling yourself up by your own bootstraps.

Speaking of which, how about those bootstraps of your own?

Even if you’re already a success you can always do better in dealing with competitive forces, can’t you?

You can go from excellence to the high side of excellence, correct?

You can do it by becoming more curious and reading more.

Too many marketing books are unread by those who have the most to learn.

But with no barbed wire enclosure to hold you in, it’s easy to get out and do one thing.

It can be a treasure trove for new ideas. A starting point for fresh thinking.

Were he with us today Reinhard Mohn would endorse that. 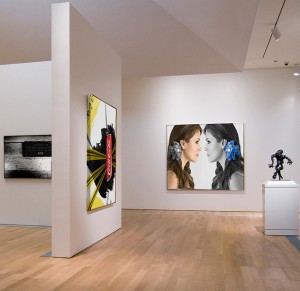 We shopped for a wedding present this week.

Each store we visited got the same question, ‘is the purchase returnable?’

Because you never know, do you?

We heard a story about a London couple whose marriage lasted five days.

But that’s ‘ages’ according to the Guinness Book of Records.

Britney Spears beats all-comers having stretched things out to a few hours after a Vegas wedding.

The five-day couple had a blazing row on honeymoon in Paris and went back to London on separate trains.

They had to return the wedding presents.

So back went the lot, including all the usual stuff like crystal wine glasses and Le Creuset ovenware.

But there was also a glass sculpture by the famous artist, Dale Chihuly.

It got us thinking about an original work of art as a gift.

Luckily a friend and talented cartoonist, Geoff Stevenson — see his work: http://on.fb.me/1CxOrq5 — steered us to the Saatchi Gallery online.

If the idea of discovering magnificent things pleases you, you’ll want to have a look. http://www.saatchiart.com

Unlike the Chihuli piece you don’t need to be a Rothschild to afford something unique.

But that didn’t end things.

We kept on looking for our own enjoyment. An hour or so later we were still at it. What a pleasure.

Wandering through an art collection gives you ideas. Somehow it opens your mind and works as a seedbed for better thinking.

Years ago when art directors and writers in London got a creative brief they’d often read it once then head to the Tate Gallery.

They said things happened as you experienced the art, you relaxed. Your creative abilities were all the better for it.

When you returned to the office there was never a shortage of ideas that were ‘different’.

How this works is a bit of a mystery. But it works.

Maybe when you take this kind of break your subconscious does the heavy lifting.

Next time you have a difficult marketing or advertising problem try it.

Your life in the office could improve by logging on to the Saatchi Gallery.

On the social side of things, if you need a wedding present you’ll be golden there, as well. 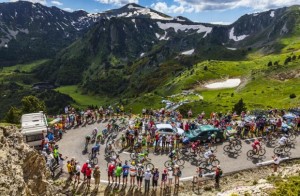 The Tour de France is on again. Maybe you’ve tuned in.

21 Stages and 3360 kilometers of racing equates to compulsive viewing.

You don’t have to be a bike race aficionado to be drawn in and captivated by the spectacle and the scenery along the route.

The last spurs tourism in a big way.

It worked for Britain with race stages in Yorkshire and London and it’s bound to work for the USA with a much-talked-about Tour start here in future.

Where will it be – Washington, DC and Northern Virginia?

Watch the Tour and you’ll see all eyes are on the favorites and race leaders; the cameras rarely point in the direction of those who are less then heroic.

Which is why the back of the race if often overlooked.

That’s where you’ll see the Broom Wagon, or as they say in French, the Voiture Balai.

It’s there to pick up the slowcoaches who can’t make it to the finish in the allotted time.

It sweeps up the stragglers, hence the name.

In the past the vehicle carried a broom over the driver’s cab.

The Broom Wagon helps to set standards; it concentrates the action, it keeps the race fast while supporting a higher level of competition by removing riders who can’t make it.

If only we had a Broom Wagon of sorts for marketing and advertising.

It could sweep away complacent content … the kind of work that’s inert on a Web page.

It could do away with emails that are boring from the subject line right to the end.

But why not go for the best work in the first place.

By challenging conventional wisdom and old standards you set yourself up for success.

When you find new truths about your brand, your products, your service and your customers you gain an edge.

When you replace drab creative solutions with something bright and extraordinary you can change attitudes.

When you present your brand as the opposite of a commodity you set yourself apart from the rest.

As we’ve all heard, it’s all about ‘adapting’ to take advantage of opportunities and avoid problems.

Failure to change is the big problem.

Because it opens the door for competitors who are intent on one thing.