Too much content these days seems to come from a corporate point of view.

So it’s hardly surprising people meet this with  indifference.

Those who approve iffy work like this say they are response-oriented, but are they really?

Because when you address your customers’ needs and pain points … when you demonstrate interest in their lives, attitudes and predicaments … things look better.

That in itself should get you up to the mediocre level.

But the idea is to go further, isn’t it?

A marketer we know said that when you’re doing okay, some people think that’s the way life in the office will always be.

Of course, that was her way of damning people for complacency.

To avoid getting stuck that way, turn to the smartest ad agency people.

Those who have the talent to add surprise value to your communications with messaging that rewards customers and prospects for looking.

We’re talking about strategists, writers and art directors who can take what’s familiar about your product or service and present it anew.

Adopt that approach and you can sidestep dry, corporate communication and the boredom that accompanies it.

So to go from mediocre to something more engaging … something that punches convention below the belt … give your agency a seat at the table.

Elevate them from subservient order takers to planning allies.

Give them the freedom to go beyond tactics and a reactive role to the kind of proactivity that questions all you do.

That way they’re in a position to uncover new directions and opportunities for you.

After all, the best agencies support you with professionals who excel at branding, innovative digital thinking and creative execution across all channels.

That way you can improve your concepting, content and power for lead generation.

Best of all, you can leave mediocre work where it belongs.

Put them on hold for a minute. Cool your jets.

In their place, take another approach to marketing and advertising.

One that can add a level of superiority and difference to even ordinary, mass-produced products.

Start by speaking to people’s feelings.

Address their problems, needs and desires.

Emotion isn’t on the curriculum.

More’s the pity because so many purchases are emotionally driven. Even when it comes to B2B.

After all, we’re still human. That hasn’t changed in spite of all the gee-whiz technology at hand.

Adding emotional appeal to your communications can lead to new growth and a more stable future.

It can give you an advantage over your competitors.

Especially those that sell the features of their products instead of the end-benefits.

So to do more for your brand, start with the study of the advertising award books.

You can do it over a weekend.

Think of it as a seminar on how to stop prospects, lengthen attention spans and create the moment someone buys.

Page through The One Show, Communication Arts or D&AD.

You’ll see how brands are humanized and how messaging is made memorable when you add emotion.

You’ll learn how to erase drabness and sidestep wearily familiar ideas that put no premium on interest or engagement.

You’ll understand how to gain attention with well-judged audacity.

You’ll realize that stories must be simple and emotionally resonant.

You’ll appreciate that better work can change the perception of your brand.

Especially when it rewards customers with wit, charm and intelligently presented facts.

By looking though the award books you can model your output on what’s extraordinary rather than what’s expedient.

Put another way, you can leave it to your competition to continue to get it wrong.

After a weekend of seeing new possibilities for your messaging, Monday morning could be different for you.

You could start back to work with your MBA and something more.

A greater degree of knowledge on how to appeal to customers.

Imagine being a homesteader on the plains of the Nebraska territory in 1843.

You’d need to be good at many things to survive.

Tommy Lee Jones embodies this sort of multi-talented ability in a film called The Homesman.

It’s on Netflix. Catch it and see Tommy Lee Jones do two jobs, as an actor and director. He’s impressive on both counts.

Jones’s double-act and the pioneer life on the Nebraska plains make us think about those with a capacity to succeed in more than just one field.

We’re talking about individuals who can do almost anything with effortless aplomb.

Chief among them could be Leonardo da Vinci.

As you know he was an engineer, mathematician, inventor, musician, botanist and writer, besides being a painter, sculptor and architect.

The artist, Paul Gauguin, was also a great writer. His book on the South Seas, Noa Noa, confirms it.

It’s as involving as his canvasses.

The greatest English language writer of the 20th century, Evelyn Waugh, was first a painter.

Then there was the photographer, poet, author, actor, singer, and director, Leonard Nimoy.

Call him a polymath … as you might remember from school vocabulary quizzes it’s a word from the Greek meaning ‘having learned much’.

Polymath describes Matt Damon and Ben Affleck who started out as screenwriters on Good Will Hunting.

The guitarist from the band Queen also happens to be, of all things, an Astrophysicist.

So how does ‘polymath’ apply to business and your company?

In many organizations people have their special abilities and often stick to them. Unbendingly so.

Departments in enterprise-level organizations frequently work separately from each other in silos.

You often see that with IT and Marketing.

But how can you succeed if one department doesn’t communicate with the other?

How do you move ahead when IT and Marketing work like nation states, separate in their culture, learning, language, vocabulary and view of success?

When the two battle it out for leadership it’s your company that looses.

Education could be the key … it’s a way to question old certainties to ensure they haven’t become new inadequacies.

Time spent developing a wider view could make a difference. It could make you less vulnerable to disorder and ineptitude.

Maybe HR could take this on.

Instead of merely recruiting staff, they could optimize training and bring in professionals to do it.

The right professionals can build internal coordination so your organization is more attentive and responsive to your customers and stakeholders.

IT people could learn more about Marketing and bottom line thinking while Marketers could become more geeky and understand the demands of IT.

A common ground could do away with fiefdoms, jealousies and the assumed knowledge that can make departments stumble.

It would take time, money and hard work, but then life in the office isn’t always a walk in the park, is it?

Take away the strife between IT and Marketing and you could sail ahead of your competitors stuck in silos.

Leonard Nimoy would have approved of that.

Because as Mister Spock might say, that’s not illogical. 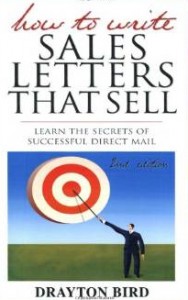 No doubt you’ve had them in your inbox … emails that don’t stand out.

They’re neither a success or a failure.

But there’s one thing you can say in their favor.

They’re delivered efficiently with the technology of content management systems.

It reminds us of an old Dutch proverb:

BLOSSOMS ARE NOT FRUITS.

For many, CMS systems are often seen as the be all and end all.

They’ve become the latest infatuation for some marketers.

But in point of fact, they’re more the blossoms than the fruit.

Especially if your emails have little power to stop people and make them read on.

As you know, it takes effective writing to earn and keep an audience’s interest.

With this in mind, we’ve been looking for books on how to write better emails.

Most of those we’ve seen are good when it comes to technology and process.

But the hope of learning to write more effective emails is a bit like waiting to board a flight when your plane is snowbound in another city.

Which is why you might want to turn to something on Direct Mail writing.

Drayton Bird’s How To Write Sales Letters That Sell can help you.

This book may be focused on letters, but it’s a primer on how to communicate with interest and get people to act.

It’s valuable when it comes to framing your story, marshaling your facts and presenting them in a way that sells.

Small wonder, it comes from an expert who was Vice Chairman of Ogilvy Direct.

Here you’ll learn how to write copy that speaks to the needs and problems of your target audience.

If you’re looking to get better at lead generation, take notes on how to appeal to human emotions.

You’ll also become adept at explaining the advantages of your product or service and justifying why it’s better than the alternatives.

You’ll benefit with Direct Mail techniques that teach you how to retain existing customers while attracting new ones.

You’ll understand how to write to people to forestall their objections to buying.

Modify them to your email needs to become more effective as you leave it to your competition to invent more ways to make communications duller.

Put Drayton Bird’s book to work for you.

That way you can start quoting that old Dutch proverb, Blossom Are Not Fruits, to your competitors.