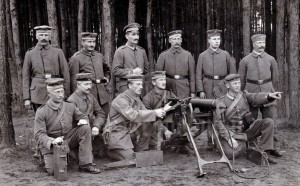 The German infantry in WWI were crafty.

They’d sneak up to the British trenches in the heat of battle and shout, ‘RETREAT, RETREAT’.

Their voices were believable as many spent time in Britain before the war and could sound like a Tommy.

Call this an example of tactics.

It could win you a few yards of territory but it didn’t always win the battle.

For that you need strategy.

With this, agencies can be relegated to little more than order takers.

Because the smart agencies excel when it comes to strategic planning and finding opportunities others don’t see.

They have an ability to present your story in a way that makes it seem brand new.

They know how to avoid the deadening ordinariness of ideas that put no premium on interest or engagement.

They’re not wedded to checklists and they understand how to break the rules to gain attention.

The smart agencies do more than create messaging to a marketer’s high level of satisfaction.

They concentrate on a high level of satisfaction for a brand’s customers and prospects.

Dove’s campaign for Real Beauty is a case in point. http://bit.ly/1c3lO3j

Equally, smart copywriters and art directors are in the boredom alleviation business.

They know brilliance is compulsory.

They’re past masters at putting emotions into people.

And they’re skilled in creating the moment someone buys.

You get that in Nike’s ‘Find Your Greatness’ work. http://bit.ly/1evMo7I

The point of all this?

Give your agency a seat at the table when it comes to strategy and content.

Get them to help your people unlearn dull thinking.

Let them head up the constant search for new ideas.

Treat them as a valued partner; empower them to excel on your behalf.

That way you can force your competition to do one thing.

As you know, magicians are normally hush-hush about the way they pull off tricks.

They don’t say a thing, they’re mum; but we were lucky.

A conjurer let a secret formula slip out over drinks the other day.

He explained how to open a show to gain audience attention.

Here’s what you do.

You soak your fingers in a solution of yellow phosphorus and carbon disulphide.

Then you wait and wait until it dries. It takes time.

When everything is as dry as a desert, you’re ready to amaze your audience.

Click your fingers and a puff of smoke floats off into the air.

It drifts along and catches everyone’s eye.

People sit up to see what you’ll do next.

None of this is surprising, really, since you’ve given your audience good reason to pay attention.

Sadly, too many Websites and emails these days do nothing of the kind.

They’re not very good when it comes to getting your attention, never mind winning you over.

You can guess the reason.

They’re inwardly focused; they talk about themselves and expect everyone to be fascinated.

The result is a bit like being cornered by a boring guy at a party.

Someone who insists on bending  your ear.

Where’s the magic in that?

But then there’s the word, ‘you’ … as in your needs, your desires and your problems.

People respond to that. They wake up.

When it comes to content your customers and prospects want to know only one thing.

How they’ll benefit from a relationship with you.

One of the great copywriters of all time, Howard Gossage, said people don’t read copy.

They read what interests them.

So take care to write content from your customers’ point of view.

If you don’t, you can bet someone else will.

William S. Harley and Arthur Davidson asked themselves that question in 1901.

One answer was the blueprint of an engine that would fit into a bicycle frame.

It became the Harley-Davidson factory in 1903, complete with hand lettering on the door.

Lettering that reflects the essence of the enterprise, not the trimmings.

Maybe that’s why a marketing director we know has this photo framed on his office wall.

It helps him think in a ‘start up’ way, he says.

It prompts curiosity, it spurs ‘what if’ questions and it motivates him to do anything it takes to succeed.

So it’s enviable that our fifty-something marketer thinks like a twenty-something in a start-up, right?

As our marketer says, ‘start up thinking isn’t always shared by everyone in a Fortune 500 company’.

It can brand you as a rule breaker. A contrarian. An outsider.

Especially if your ideas go against the established strategy of the day.

After all, when money is rolling in, why tamper with your revenue stream? Why change?

Shareholders will be the first to echo that.

So how do you improve on improvement?

How do you get different thinking to be taken seriously?

How do you change so you can avoid difficulties like the ones Kodak suffered?

On the positive side, how do you cash in on opportunities nobody else sees, like Reid Hoffman, founder of LinkedIn.

Harley-Davidson was forced to grapple with each one, and more.

For decades their engineering was unchanged; H-D wasn’t famous for innovation.

Few thought of making improvements to bikes that were bringing in revenue.

But that wasn’t to last.

H-D became vulnerable to the massive importing of Japanese bikes.

The company almost went belly up.

There were ownership changes and massive restructurings.

They suffered strikes and losing younger customers to the competition.

They went beyond the established strategies with new designs.

The company came back as brand leaders in America for heavyweight motorcycles.

The new ‘Revolution X’ platform, lightweight bikes aimed at Millennials, is in place to broaden the appeal of the brand.

And maybe with the 10 X 15 factory in mind, H-D thinking has become more like start-up thinking.

Evidence of that is Project LiveWire — the design and manufacture of electric motorcycles. http://bit.ly/1M5iEf3

There’s a radical change for you.

A turbine sound isn’t exactly in character with the traditional exhaust note of a Harley … http://bit.ly/182aveh.

But when it comes to the future, an electric whine on the highway could be an answer to one vital question.

If you’re anything like people in our office you bought the Steve Jobs biography the day it was released.

Everyone we know read it.

Some carried it around like a badge of honor; one that announced them as a member of an elite team, like Seal Team 6.

Well, the story does ally you to a different sort individual and company.

That was then; now there’s something of a let down.

Not with Steve Jobs but with Walter Isaacson, his biographer.

Seemingly, he could have upped his game.

According to Jonathan Ive, head designer at Apple, Isaacson’s book has inaccuracies.

Ive is well placed to know.

He and Steve Jobs were best friends. Equally, Jonathan Ive knew him better than anyone in a professional sense.

They thought along the same lines for years.

In fact, they worked as a team since Jobs rejoined Apple as CEO after launching Pixar and NeXt.

Jonathan Ive says he thinks little of the Isaacson effort.

Read about it in the New Yorker, the week of February 23rd. http://nyr.kr/1L1Thdt

It’s an article on Jonathan Ive, by Ian Parker. It’s called The Shape of Things to Come.

By the way … it’s Sir Jonathan Ive, to get a detail right.

Before reading put your iPhone on mute and settle in for a lengthy article.

Thanks to Ian Parker, who was virtually imbedded at Apple, you learn a lot.

Like the fact that insiders see Ive and the way he thinks as the heart and soul of Apple.

After all, he goes where the mapmakers haven’t been. He’s not about finding a trend and hopping on for the ride.

As you can appreciate, it’s more groundbreaking than that.

You get Ian Parker’s take on a design studio that’s open to few people — including Apple employees.

Here’s betting that in your company, designers don’t have anything near the influence they do at Apple.

Certainly design teams have never had a champion who established their right to call the shots as Jobs did.

Ian Parker goes into the kind of industrial design thinking that forces all others to play catch-up ball. They live life on the back foot.

They like it that way as it avoids disruption.

At Apple it’s all about the work and focusing on projects such as the new watch.

There’s purity for you.

Incidentally, you’ll read about cars and car design, as Jonathan Ive is an aficionado. A motorhead.

He had a hand in influencing the design of the new Bentley GT Concept Car, the EXP 10 Speed 6, presented this week at the Geneva Motor Show.

But there’s nothing about an Apple car.

If it is in the planning stage, not even Edward Snowden could detect it.

But that hasn’t stopped people admiring an audacious move, has it?

It seems almost fashionable these days for corporate types to talk about becoming more Apple-like.

After reading this article you might say a note of caution should be added to that.

Because Jonathan Ive’s approach is unique and ever-changing. Unlike others.

Copy him and you might get little for it.

Because just as you’re about to launch, he could monopolize public attention with something entirely new and exciting.